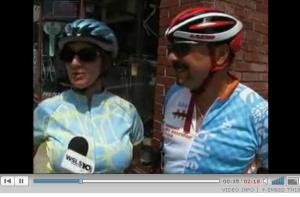 For three days, 2,000 cyclists from Virginia and other eastern states encamped in Radford as part of the 2011 Bike Virginia Tour. And, to help the region make the most of the event’s economic impact – projected at more than $1.5 million over the complete five days – Main Street Radford was busy providing volunteers, information, a welcoming spirit and beer.

As part of the host team, Main Street Radford partnered with City of Radford Tourism and the Radford Chamber of Commerce to provide tips on enjoying the community at an information booth. They also set up and operated a beer truck with the Chamber during the evenings.

“The comments have been terrific,” said Main Street Radford Executive Director Becky Haupt. “We’ve been able to tell a big group of visitors about what there is to do and see in our community, and they’ve been very appreciative. We’ve also been able to tell the bikers about specific merchants in the district.”

Volunteers wore Main Street Radford t-shirts with the word “volunteer” on the back.  “We’ve been told many times by riders how much they  appreciate the effort,” said Haupt. “And, we’ve been told how much they like our community. It’s been good visibility for the community and the organization.”

In 2009, the tour visited the Designated Virginia Main Street Community of Orange. In 2010, it passed through both Harrisonburg and Staunton.  For more information about this year’s event and its projected economic impacts, watch the WSLS story here.