From the first American colonies to the modern college town, many Virginia communities have a rich history to share. Two VMS communities have recently been recognized for transforming aspects of their pasts into valuable assets for their downtown neighborhoods. 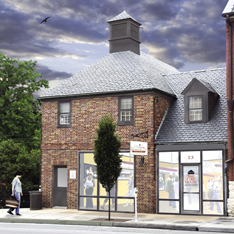 Berryville Main Street has received the Virginia Downtown Development Association’s 2010 Building Development and Improvements Award of Merit  for its Fire House Gallery & Shop. The gallery, which opened on January 8, is housed in a restored 1930’s firehouse. While the primary focus of the gallery is artwork, it also contains a “Resource Room” to inform visitors about the Berryville Historic District.

In addition to preserving a historic building, the Fire House Gallery has already generated $20,000 in sales and created three new jobs. Over 400 people have purchased from the gallery, and it is a major draw to the Berryville Historic District for residents and visitors alike.

Harrisonburg is taking a different approach to sharing its history with the community. The city recently dedicated three new Civil War Trails markers downtown. The markers stand at the former sites of Harrisonburg’s Confederate General Hospital, Hill’s Hotel, and the Soldiers’ Cemetery at Woodbine. Adding these new Civil War Trails markers will inform the community and visitors of the stories of life in Harrisonburg during the Civil War. The markers were funded through a grant from the Virginia Tourism Corporation and the Virginia Sesquicentennial of the American Civil War Commission.

Want to stay up-to-date on historic preservation efforts in Virginia? The Department of Historic Resources distributes a weekly newsletter that deal with preservation, history, architecture, archaeology, planning issues, museums, conservation and other related topics in Virginia and elsewhere. To sign up, please contact Randy Jones.